Ever lie awake at night wondering where you could get a hermit crab, a small cage for it to live in, and perhaps some salt water taffy and novelty t-shirts? You probably haven’t, but it’s possible your children have. And they know just the places.

They’re Going Out FOR Business!

Drive up and down any of the roads running parallel to the beach and your likely to see one of the many, many beach stores. These imposing structures are lit with bright lights 24/7, with eye-grabbing “Going Out For Business” signs, and sometimes a menacing sculpted entrance featuring some sort of sea creature. And a quick aside: don’t be fooled by the “going out for business” claim. They swapped out prepositions, “of” for “for,” and are hoping you don’t notice the difference!

They go by many names, Eagles, Bargain, Pacific, and Jaws, but they are all fairly similar when you get down to it. They sell convenient items that you may have forgotten on your way to the beach  like sunscreen, towels, umbrellas and sunglasses. That’s the practical stuff, but what typically lures the families in are the novelty items that kids can’t resist: hermit crabs, shark tooth necklaces, and starfish.

Any store that can afford to fly a banner advertisement proclaiming “FREE SHARK TOOTH NECKLACES” up and down the coastline behind a prop plane usually has a wise business strategy behind it. And once the kids start begging to stop, well, you might just pop in to one to shut them up.

So what’s the deal? Can you stop by and get your free necklace, or sand dollar or hermit crab and be done with it? The answer, as suspected, is that it’s usually not exactly free. I searched the Monster Coupon Book, the free (and online) directory of coupons for Myrtle Beach area shops, restaurants, golf and attractions to read the fine print, and here’s what I found: 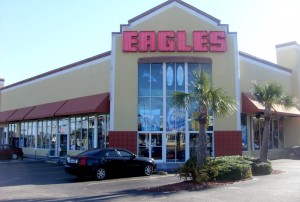 At Eagles Beachwear stores, which Google lists as having over 25 stores in the Carolinas region, there are some free items that come with any purchase. A free sand dollar or starfish comes with any purchase, while supplies last, of course.

So I suppose you could buy the cheapest item and receive either. The hermit crab, by far the most wanted item when I was a child, is free with the purchase of the hermit crab cage. As for the shark tooth necklace, well, they aren’t free, but with the coupon you can get them for .99 cents. Check out all of the Eagles coupons here.

Over at Bargain Beachwear, the deals look eerily similar. I get the suspicion that we are living in an era of hermit crab wars. According to the coupons at Monster Coupon Book, Bargain Beachwear peddles a .59 cent hermit crab with the coupon, but this is without a cage. If you make a cage or already have one, this is clearly a good option, provided the kids don’t lose it in the meantime.

Similarly, they offer a free sand dollar or starfish, but their offer requires no purchase at all. However, the fine print says one per family, and I know I can’t go anywhere without each of my girls getting a fair shake, so I’d probably have to go out of pocket, full-price on the second one. Tough call, folks. You can view all the Bargain Beachwear coupons here.

In addition to Eagles and Bargain, there are a number of smaller beach stores with fewer locations, and I’d venture to bet that their offers are similar. But while these freebies will get families in the door, they are really banking on you spending more. Boogie boards, backpack beach chairs, a hot/cold drink tumbler with your favorite pop-culture reference on it? Can you really go in and come out with one hermit crab? They’re betting you won’t.