Aside from the abundance of sunshine and breathtaking shoreline, seagulls can be found all around the Grand Strand area. Seagulls are officially referred to as “gulls”, no sea, and can be found around the ocean but are not specifically ocean birds.

But the REAL question is, “is it safe to feed the seagulls while on your vacation here in MB?”    The short answer?  Safe? NO!  Just a little bit fun?  Yes.

Now let’s probe some burning seagull questions, shall we?

In a word, yes.  In a recent study, seagulls were found to be responsible for E-coli contamination as well as carriers of antibiotic-resistant bacteria.  It is best not to handle the birds or come in direct contact with them, for health reasons.

That is another “yes”.  It has even been reported that a man suffered a rare flesh-eating infection, after being nipped on the finger by a seagull!   Not only that, it is difficult to extricate your finger once the gull’s beak has gripped it. To the gull, a french fry and a finger BOTH might look appetizing. 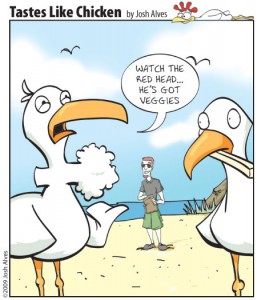 That would be “yes” again!  You also run the risk of being swarmed..think Alfred Hitchcock… and pecked, especially in the presence of food.  That would put a damper on the vaca!   Seagulls are scavengers.  Some of the most common “people food” that seagulls dine on are discarded fast food chicken legs and pizza scraps!  Their scavenger nature is the reason they are often found in parking lots of grocery stores and restaurants – in search of their next meal.  They have even been known to grab food out of human’s mouths!

So Why Do they ‘Attack’? 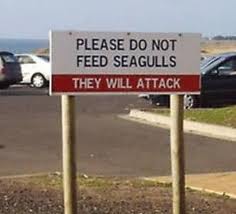 In large part, seagulls swoop or attack for one of two reasons.  They are protecting a nest you have most likely accidentally stumbled upon or because they have often been fed by hand from humans.  Gulls have lost their fear of humans as a result of frequent hand feeding.  They do not distinguish between taking food and food being offered to them.

Some signs to look for that would indicate an attack may be looming are low warning cries and menacing circling by the gull(s).  This can be followed by pooping and vomiting on the perceived threat!  And if THAT doesn’t do the job, they will produce their talons – ouch!

Generally speaking, it is best to enjoy seagulls from a distance and not try to feed them or handle them in any way.  There is no need to run screaming from them, just best to enjoy from a safe distance.  Seagulls are part of the landscape, for better or worse!

**Please note, just so we are clear, CondoLux does not encourage the feeding of seagulls. Do so at your OWN risk. We are not responsible if they bite your fingers or make off with your McD’s bag.

5 thoughts on “‘No Timmy! Leave that seagull alone!’ (Should You Feed the MB gulls?)”